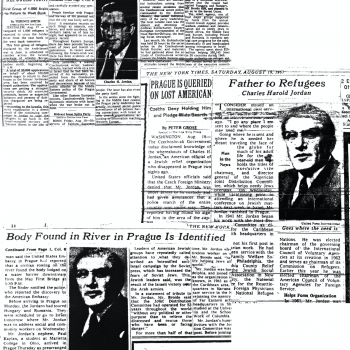 Where: on your computer, tablet, or smartphone (presented live online via Zoom Meeting)

Sharing excerpts from his book about Charles Jordan, the executive vice-president of the American Jewish Joint Distribution Committee (JDC) who was found dead in the Vltava River in Prague, Czechoslovakia, on August 20th, 1967, Martin Šmok will share the newly discovered information about his contacts with Prague and the Czechoslovak Jewish Exiles in the United States.

Who was this executive of the most influential Jewish philanthropic organization of the time, a leading UN expert on refugee matters awarded with the French Légion d’honneur and the Norwegian Nansen Refugee Award? Why was he nicknamed Father of the Refugees? What kept him returning to enemy territory – the Communist and Arab countries? What kind of secret negotiations and rescue through ransom plans was he involved in? Why did he come to Prague in the summer of 1967, how exactly did he die?

Martin Šmok is a documentary filmmaker and independent researcher. Besides working as a consultant for the USC Shoah Foundation for over 20 years, Šmok authored two documentary film trilogies examining modern history of Jewish presence in Czechoslovakia: "Among Blind Fools," capturing the rescue through ransom negotiations in wartime Slovakia, and "Between a Star and a Crescent", dedicated to the role of Communist Czechoslovakia in the Middle East.

This event is organized by the Society for the History of Czechoslovak Jews (SHCSJ) with support of BBLA (Bohemian Benevolent and Literary Association).

Registration
Registration:
RSVP via Eventbrite for the Zoom link (will be recorded & available on YouTube)
Cost
Cost:
Suggested donation $10.