The history of the settlement of Krásné dates back to the middle of the 13th century. When Vilém of Pernštejn married his daughter Markéta to Ješek Doubravka from Jakubov, he had her put a dowry in the land records in 1392, to which the village of Krásné also belonged. From this record it is judged that the village was founded on the territory belonging to the Pernštejn Castle Dalečín, probably under the heirs of Stephen II. from Medlov. Jan of Pernštejn pledged in 1437 to his wife Barbora of Valdštejn as part of his dowry an annual salary from the village of Krásná. In 1483, the settlements of Krásné and Spělkov were under one mayor from Bystřice. During the division of the Pernštejn estate in 1500, the settlement belonged to the New Town of Jimramov. In 1507, William of Pernstein divided his estates among his sons in order to avoid inheritance disputes and misunderstandings. 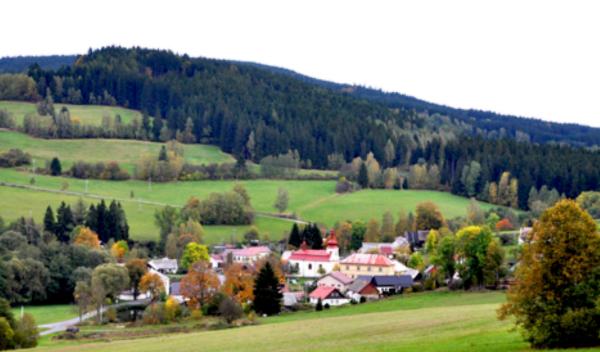 Modern day Krásné. That large forested hill in the background separates Krásné from Telecí on the other side.

After 1534, control went to Jimramov, including Krásné and Spělkov. In 1588, the brothers Jan and Maxmilián of Pernštějn inherited the Jimramov part of the land. in 1603 the manor was sold to Vie Dubský of Třebomyslice, who in 1605 gave the manor to his son Jan. Vilém Dubský's estates were then lost to Štěpán Schmidt of Freyhoffen for 20,000 Moravian gold coins. During the execution, the estates were forfeited to Anna Maria Šliková, to whom he was indebted. She sold them in 1632 to Jiří of Náchod and in 1650 they were taken over by Ferdinand Leopold of Náchod and Lichtenburg, who treated the estate very cruelly.

In 1778 the manor belonged to Count Antonín Belcredi, after whom it was inherited by his son Edward. Other heirs became Egbert Belcredi (1816-1894), Edmund Belcredi, again Egbert and then Richard Belcredi. The Belcredis are discussed in more detail in the section on ruling families.

Taxes to the Rulers

The period of my immediate Czech ancestors was one of transition from the feudal system of the middle ages, to the monarchy of the Austro-Hungarian Empire. The most remote ancestor, 4th great grandfather Václav Kadlec, lived in the middle of the 18th century, about 1740-1790. That means he lived at the time of the reigns of Maria Theresa (1740–1780) and her son Joseph II (1780–1790) of the Austro-Hungarian Empire. Those rulers set forth dissolution of feudal social structures and the curtailment of power of the Catholic Church. Maria-Theresa nationalized and Germanized the education system, eliminated Jesuit control, and shifted educational emphasis from theology to the sciences. Serfdom was first modified by Maria-Theresa -- robota (forced labor on the lord's land) was reduced, and serfs could marry and change domiciles without the lord's consent. Serfdom was completely abolished only in by Joseph II.

By introducing social and education reforms, these rulers provided the basis for economic progress and the opportunity for social mobility. The consequences for Bohemia were manifold. Many of the nobles sublet their lands and invested their profits in industrial enterprise, such as the development of textile, coal, and glass manufacture. Czech peasants, now free to leave the land, moved to cities and manufacturing centers. Urban areas, formerly populated by Germans, became increasingly Czech in character.

The sons of Czech peasants were sent to school; some attended the university, and a new Czech intellectual elite emerged. As a result, in 1750 there were only 6 farmers and 13 cottagers in Krásné without land, mostly day laborers.

The official Krásné history is given at their website, but unfortunately, it does not translate clearly by any means available to me. However, it is certain that at the end of the 17th century, Krásné was paying three forms of taxes: money, farm goods, and forced labor. Krásné together with Spělkov were paying “3 gold and 15 tailors” to the lords. Those were probably gold ducats (zlatý dukát), which had 3.5 grams gold, today the metal is worth $150. But, they also gave “3 gold and 30 tailors” to the parish priest. Farm produce given to the rulers included beer, lumber, oats and eggs.

But, by far, the most onerous tax was the labor requirement. In the late 1600s, the village history records the required days of work by villagers: 16 days sowing and raking oats, 30 days haying, 8 days processing grain and hops, 7 days harvesting cabbage, 14 days washing and shaving sheep, and more.

In the second half of the 18th century and in the 19th century, there was a significant increase in the village of Krásné. The lords had a hunting lodge, distillery, mill and two sawmills with a machine for the production of shingles. At that time, the mill included a saw mill and an oil mill.