This legendary tree in Telecí is associated with the time of religious oppression. According to an expert estimate, one of the oldest and largest Czech linden trees is around 700 years old. Trunk circumference almost 12 m, crown height 25 m. The legend tells of a secret Czech brother, who found refuge in a spacious and then closed cavity of a tree while copying the New Testament and forbidden psalms. He shone with tallow candles, sang the lyrics, and the sound of a large crown gave the impression that a linden tree was singing. The topic was elaborated in various literary ways by A.Jirásek, T.Nováková, A.Wenig, M. Bureš, J. Orebský. Two variants of the story are excerpted here. 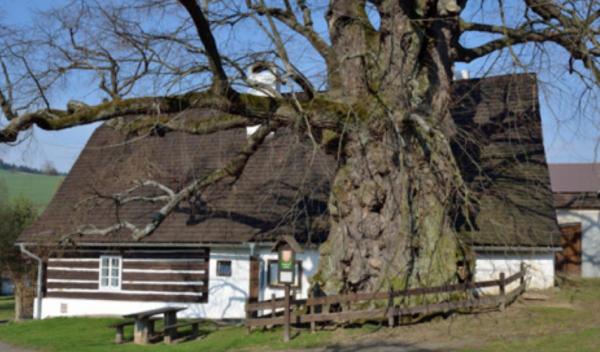 Miloslav Bures (1909-1968): From the collection "Singing Linden: Legends and Stories from the Highlands", published in 1956.

“Lukásova Lípa, named after the former owner, has been buzzing in the village of Telecí for several hundred years. This rare tree has long belonged to everyone, because it has merged with the lives of our ancestors, who fought in this region for faith and freedom of thought. Everyone talks about it with love, as if it were a living tree. Yes, this linden used to sing. She sang in a human voice. She is the mother of all linden trees in these corners of the Vysočina region. It was in ancient times, when the locals could only secretly profess their faith. The persecution after the Battle of Bělohorská (Battle of White Mountain (8th November 1620) also affected villages in the Polička region. Books by the best patriots and priests were burned at the border. Many of our honest people have had to flee abroad. Those who remained met only secretly to borrow protected books from each other and make sure they still lived in the same thought and were close in heart. At that time, old Jiroušek lived in this village. He knew the need for books that strengthened the heart and spirit. He decided to describe the most important ones if his strength was enough. So that the unauthorized would not know about it, and also so that no one would disturb him at work, he found a hiding place where hardly anyone could look for him: in the hollow trunk of Lukás's linden tree. Her spreading trunk measured twelve meters in circumference, so a table with a chair squeezed into her. Old man Jiroušek always entered the hollow of a tree in the dark.. He wrote long into the night by tallow candles. He made a comma on the plates for each candle burned. According to these simple records, he consumed 1,204 candles at work. He began copying the New Testament, which he wanted to complete as soon as possible. When he rewrote the book, he decided to add psalms to the copy. When copying them, he quietly sang verse after verse, for here and there the forgotten word remembered him better. The old man heard very little. Little did he know that his voice, coming from the trunk of a tree, coincided with its murmur, as if a linden tree was really singing. People who passed by at night and heard the singing did not know whether it came from a crown or from a tree trunk. They didn't find it. The enemies, who wanted to reveal the secret of the singing tree, left in intimidation. Old man Jiroušek also wrote old songs. Lukás's linden tree, which has since been called "singing", provided him with the necessary refuge for further work.”