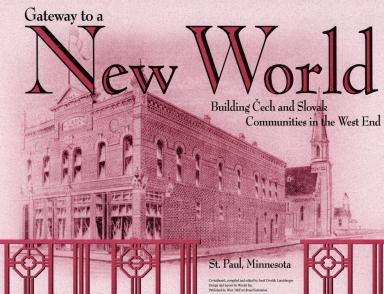 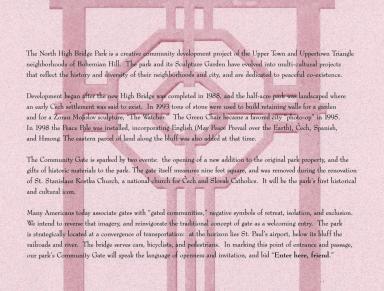 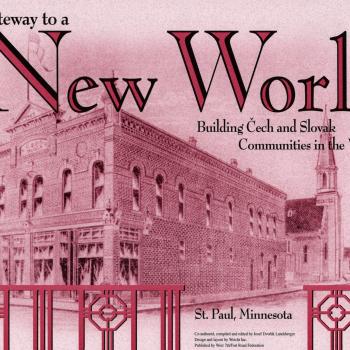 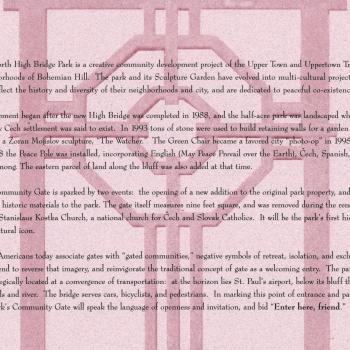 Gateway to a New World

The North High Bridge Park is a creative community development project of the Upper Town and Uppertown Triangle neighborhoods of Bohemian Hill. The park and its Sculpture Garden have evolved into multi-cultural projects that reflect the history and diversity of their neighborhoods and city, and are dedicated to peaceful co-existence. Development began after the new High Bridge was completed in 1988, and the half-acre park was landscaped where an early Cech settlement was said to exist. In 1993 tons of stone were used to build retaining walls for a garden and for a Zoran Mojislov sculpture, “The Watcher.” The Green Chair became a favored city “photo-op” in 1995. In 1998 the Peace Pole was installed, incorporating English (May Peace Prevail over the Earth), Cech, Spanish, and Hmong. The eastern parcel of land along the bluff was also added at that time. The Community Gate is sparked by two events: the opening of a new addition to the original park property, and the gifts of historic materials to the park. The gate itself measures nine feet square, and was removed during the renovation of St. Stanislaus Kostka Church, a national church for Cech and Slovak Catholics. It will be the park’s first historical and cultural icon. Many Americans today associate gates with “gated communities,” negative symbols of retreat, isolation, and exclusion. We intend to reverse that imagery, and reinvigorate the traditional concept of gate as a welcoming entry. The park is strategically located at a convergence of transportation: at the horizon lies St. Paul’s airport, below its bluff the railroads and river. The bridge serves cars, bicyclists, and pedestrians. In marking this point of entrance and passage, our park’s Community Gate will speak the language of openness and invitation, and bid “Enter here, friend.”